Skip to content
You are here
Home > Present Day > Predictions
0
This is a really tough division to pick. A lot of teams made a lot of of changes this year, but I still think it will be a two horse race between the A’s and Rangers. Without further adieu:

AL West
1. Oakland 92-70
Bob Melvin’s green and yellow elephants will be, once again, in the playoffs (will we see a third straight A’s/Tigers ALDS?). Last year was a very solid year for the A’s, namely behind the offensive production of Josh Donaldson (.301/29/93, 4th in MVP voting). Despite their winning record, Donaldson was actually the only player to hit over .300 (other than Kurt Suzuki who played in 15 games), but they came in third in the AL in runs and home runs, so the long ball was essential to them last year. This year will be mostly the same: GM whiz kid Billy Beane did not make any major free agent pick ups, so Melvin will be putting out nearly the same lineup. Reddick and Crisp, both excellent defensive outfielders, had down years, hitting .226 and .261 respectively. Reddick was bothered with a wrist injury, resulting in a lack of hitting to the power alleys and simply a lack of playing time. Crisp’s average was down but his on base percentage was right on par with the rest of his career, though his stolen bases were far down compared to his last few years in Oakland. The rotation lost 18-6 ageless wonder Bartolo Colon, but other than him, the oldest starter last year was Tommy Milone at age 26, so the future is very bright on the bump. Right now their rotation is looking like Griffin, Parker, Gray, Milone, and Straily. Very young, but a lot of potential. Last year they won 96 games, I think that’s possible but not all that probable given the Mariners revamping of their roster.
2. Texas 90-72
The Rangers lost some key players in this offseason: AJ Pierzynski, Joe Nathan, Ian Kinsler, and Nelson Cruz. Cruz was gone most of last season and they did just fine, but there’s no denying his big bat will be missed. That said, manager Ron Washington was also given a lot to work with this offseason, signing Mitch Moreland and JP Arencibia to deals, as well as outfielder Shin Soo Choo to a 7-year deal and Prince Fielder from the Tigers. There is a little bit of pressure on Fielder because of all the talk of moving to a more hitter-friendly ballpark. Last year, Comerica had a park factor of 108 and Arlington had a 102 which means that Comerica was even more friendly to hitters, but maybe the change in the atmosphere will be good for him. Andrus and Beltre will be excellent as usual, but youngster Jurickson Profar will be tried at second base. I think he’ll do fine as long as he doesn’t hit in the 2 slot. Choo was a hotly contested free agent, sought after by a number of teams for his crazy .423 OBP (granted, he played in a matchbox in GABP). He’ll most likely play center and young stud Leonys Martin will take over in right for Cruz. The Rangers’ rotation is top heavy, with Darvish (Cy Young candidate) and Derek Holland at the top. Matt Garza was a nice addition last year but he has moved on to Milwaukee, so Alexi Ogando will take over and continue the nice season he had in 2011 (13-8, 3.51 ERA). The key to the Rangers season, and this is bold, I know, is Neftali Feliz. The former ROY has oscillated back and forth from starter to closer and its taken a toll on his body, causing some lingering biceps issues last year. With Nathan gone, the closing role should be his and if he stays healthy, the Rangers could do some damage.

3. Los Angeles 81-81
Scioscia is an awesome manager. Last season, he had a lot of things working against him in terms of injuries (Pujols and Bourjos) and completely underperformance (Joe Blanton going 2-14). Trout will be Trout and likely go .325/.430/.560 (wow) and rub off on JB Shuck on both sides of the ball. Hamilton is a wild card, his first year in LA was not pretty, and I think he’ll improve but not much. We won’t see 2010’s .359 average, but we won’t see 2013’s .250 average, either. My prediction is somewhere around .270 but with a lot of fly balls and strikeouts. Pujols will be heathy (hopefully), adding some protection, and the offseason pickup of David Freese, likely 5-hitter, will add even more. Raul Ibanez is a good addition, likely as a DH for an injection of power every once in a while. He won’t put up an MVP campaign, but will have a respectable year for a 42-year old. Kendrick is a highly underrated second baseman, and I expect him to hit .310 this year. Similar to the Mariners, they are offensively challenged when it comes to catchers; between Hank Conger and Chris Ianetta, they produced 18 home runs and 60 RBIs. Signing veteran Yorvit Torrealba will aid their growth in hitting. CJ Wilson will again anchor the aging rotation, which is their weakest link. Past he and Weaver, it’s a crapshoot. Ernesto Frieri was pretty shaky last year, going 2-4 with 1.4 home runs per nine. Not good. If the Angels want to win this year they will have to hit, hit, and hit some more. Last year, their team average of .264 was 3rd in the AL and their 733 runs scored was 6th.

4. Seattle 74-88
Oh boy. Jack Z did some work this offseason. With a solid core of King Felix, Hisashi Iwakuma, and Justin Smoak, the Mariners overloaded their artillery with offense by signing Robinson Cano, Corey Hart, and Logan Morrison. 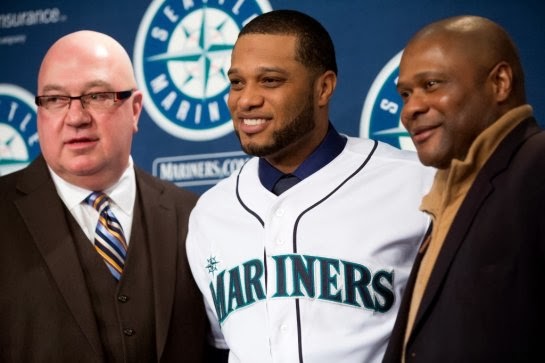 By adding closer Fernando Rodney, last year’s shaky closer Tom Wilhemsen will be off the hook, though I don’t think Seattle fans know exactly Rodney’s style (walk two people, throw a wild pitch then strike out the side). Young catcher Mike Zunino will be the everyday catcher so maybe his .214 average will sneak above .250. Hard to believe last year at .214 he was Seattle’s best offensive catcher. Kendrys Morales is not coming back and Justin Smoak will most likely once again barely hit .230. Signing Hart and Cano is great, but the guys around them are not there yet. They are either too young or just have too many bugs in their swing to be successful. I also don’t think Cano will have as many home runs at Safeco, but he will have more doubles. Last year he hit .313/.383/.516 with 27 home runs and 107 RBIs. In a pitcher’s park like Safeco, I’m guessing he’ll have a .298/.365/.478 with 24 home runs and 99 RBIs, as well as a vicious chorus of boos when he goes back to the Bronx. Also, let me say I think the Mariners settled big time with hiring Lloyd McClendon. In 4.5 years managing the Pirates, he was 110 games below .500. He is not a good manager and I think they were just impatient in signing someone to man the helm. All in all, a few big names will not bring a championship. I think they’ll bring a winning season (eventually) but aside from their bright stars, the future is kind of dim.

5. Houston 57-105
The Astros will probably be in the basement for a few more years. Their farm system is wicked, with Mark Appel, Carlos Correa, and Jonathan Singleton, but these guys can’t even drink a beer yet (well Correa can’t), so they probably won’t be playing professionally any time soon. As far as this year goes, Bo Porter will do what he can with what he’s given. He’s not a bad manager, he just has players that can’t compete. Jason Castro, Jose Altuve, and acquisition Dexter Fowler are bright spots, but when your best pitcher is 4-12 with a 4.59 ERA, good things won’t happen. Seeing how Fowler will adapt to the hill in center will be interesting. He’s played there a few times before, when the Astros were in NL, but other than that, I’m sure he’s rarely been to the Juice Box (Minute Maid Park).